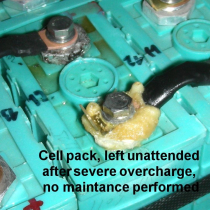 The photo shows an example of the cell damage by incorrect use. As you can see at the terminal (the upper one), it is evident that the terminal was partially melted by a short circuit. You can clearly see the burns and missing melted points on the terminal.

As you can see, the results of improper care for the cells are obvious. We show this as a warning and we would like to advise our customers that they make professional installations.